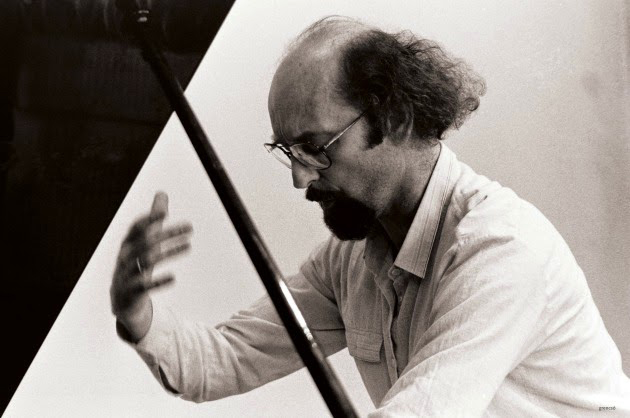 *The portait is of young György at 3 years old, painted in 1942 by the well-known Hungarian painter, Lajos Márton

György Szabados, a well-known character of the improvisative contemporary music scene across Europe, was born in Budapest on July 13, 1939. His father was a physician, his mother a singer and singing teacher.

His extraordinary talents manifested themselves at an early age. His musical occupations were filled with improvised piano-playing, a constant disposition for expressiveness, and for composing.

His musical studies were influenced by this unfolding ability as well; he completed the necessary studies by private education. In the meantime, fulfilling the wish of his father, he also took his degree as Doctor of Medicine.

The evolution of his career was seriously hindered by the extremely closed, ideologically restricted intellectual and artistic life in Hungary of the earlier period, when all different spiritual manifestations were forbidden, considered as dangerous and not allowed to exist. Like all over Europe, also in Hungary, it was the effect of jazz which exercised an important influence in the direction of the evolution of live musicality. So, also in case of Szabados, it was naturally the jazz-effect which finally set free his improvisative ability.

Nevertheless, Szabados is not a “jazz musician”. His music is extraordinarily dynamic, a European and Hungarian music in sense of both tradition and modernity, filled with the liveliness of spontaneity and with the strength of intellect. After several attempts, he could come out of his isolation in 1972, and by means of the jazz only. And right away, he won the Grand Prize of the Jazz Competition in San Sebastian in the Free-Jazz category. Though this prize caused him at home at least as much trouble as enjoyment, he slowly became able to give more and more concerts, especially in the domain of universities.

He founded a contemporary musical workshop, where he introduced a number of students into the world and practice of the improvisative contemporary music. His creative approach is based on the harmony between the composition and free improvisation, on the music as natural language and on the man as refined intermediator.

It was from the 80’s only that he could enjoy the possibility of regular concerts abroad, recordings and an acknowledged, continuous creative work. His strong and original musical world follows and builds a peculiar way of the new music.

In appreciation of his work he received the most important Hungarian musical honour, the Liszt Ferenc Prize in 1983. In 2001 he was awarded the Prize for Hungarian Art as well as the Szabó Gábor Life Achievment Award. Shortly before his death he was awarded the Kossuth Prize, the most prestigious cultural award in Hungary, by the President of Hungary in 2011.

A well-known composer György Ligeti considers Gyorgy Szabados to be one of the most important composers in Europe today (see his writing about CD “Sand Music /Homoki Zene). Szabados work is one of the rare works of organic music that does not have elements of strain stemming from the constructivism and lucidity of the human mind. A content of his music is deeply rooted in the sacral nature of the archaic times. But, as Béla Bartók has phrased it, «in today’s attire».