György Szabados: The music, the world and man

Reality is composed of thousands of threads simultaneously: parallel, crossing, intertwining, coming together in space covering the whole universe, in time from the beginning towards the future. During his short life every man senses something of parts of Reality but the human brain is hardly capable of perceiving the functioning of the whole structure. Luckily, there live some extraordinary people among us, whom God has given a lantern. They discover many more correlations in this rich reality, they see things which the average person does not notice – although Reality manifests itself equally to all. Such a man with lantern is György Szabados, the „polymath of the Danube bend” (as György Esztergomi declared).

The title of the lecture refers to the fact that not simply transparent correlations will be dealt with. As we have suspected the biggest problem is with the world: by the time the world made it through to the 20th century, God was killed and replaced by human goals. However, human goals are final, egoist and falling into dead-ends. The big achievement of today’s developed civilisation is that material prosperity has been reached against nature and not in accordance with nature. The self-confident man of our conceited, snobbish world is lonely because he cannot understand the splendour of the spiritual existence. Therefore, his research is not aiming at the attainment of spiritual knowledge but at the knowledge of the material: he is dismantling everything to its composing parts, takes everything to pieces, and as his activity goes deeper and deeper, he gets stuck more and more in material. He who is researching downwards, becomes more stupid with regard to spiritual knowledge. Since every solution, every answer to the questions has to be looked for from above.

Music is Creation’s primordial manifestation. At a physical level, music is vibration, fluctuation, like noise. We have the impression that in today’s world it remains at this level: hard, shrieking, destructive mass music flowing towards us. The spiritual man is defending himself and is closed in upon himself. Béla Hamvas approached music from the direction of the Creator, and he comes the nearest to it: music is the language of existence. Every living and lifeless creature in the material world sends out vibrations, this is the language of his existence, sacrality emerging from the secret of his existence. Music is such a world-view on a stable foundation, which makes a lot of things understandable, and we have reached already the higher regions of philosophy. The world is energy dropped into shape; when it gives a sign of life, it makes one hear a sound. It would dissolve without a shape but shape itself is lifeless, it is stiffness: death hidden in the living. Every earthly power has understood that music is world-power and has used music for its own purposes and still does.

Man is between the world and the music. Sometimes orphaned and abused, sometimes an ignorant instrument in the hands of evil forces, sometimes a worthy and humble creature. The latter makes our life liveable, preserves the traditions for the future and helps the frail human to find the way leading to the Creator. His consciousness and sublimity are nourished from the recognition that music is the only art of life – all the rest are objectual arts, lacking a relation to vibration. Creation also took place by vibration according to the Indian tradition. That is why music belongs to the Creation, to Life. If we don’t place music back to its deserving place in the world, if we don’t return back the world turned inside-out, we are not worthy to the Creator. In this case, what makes us Man? 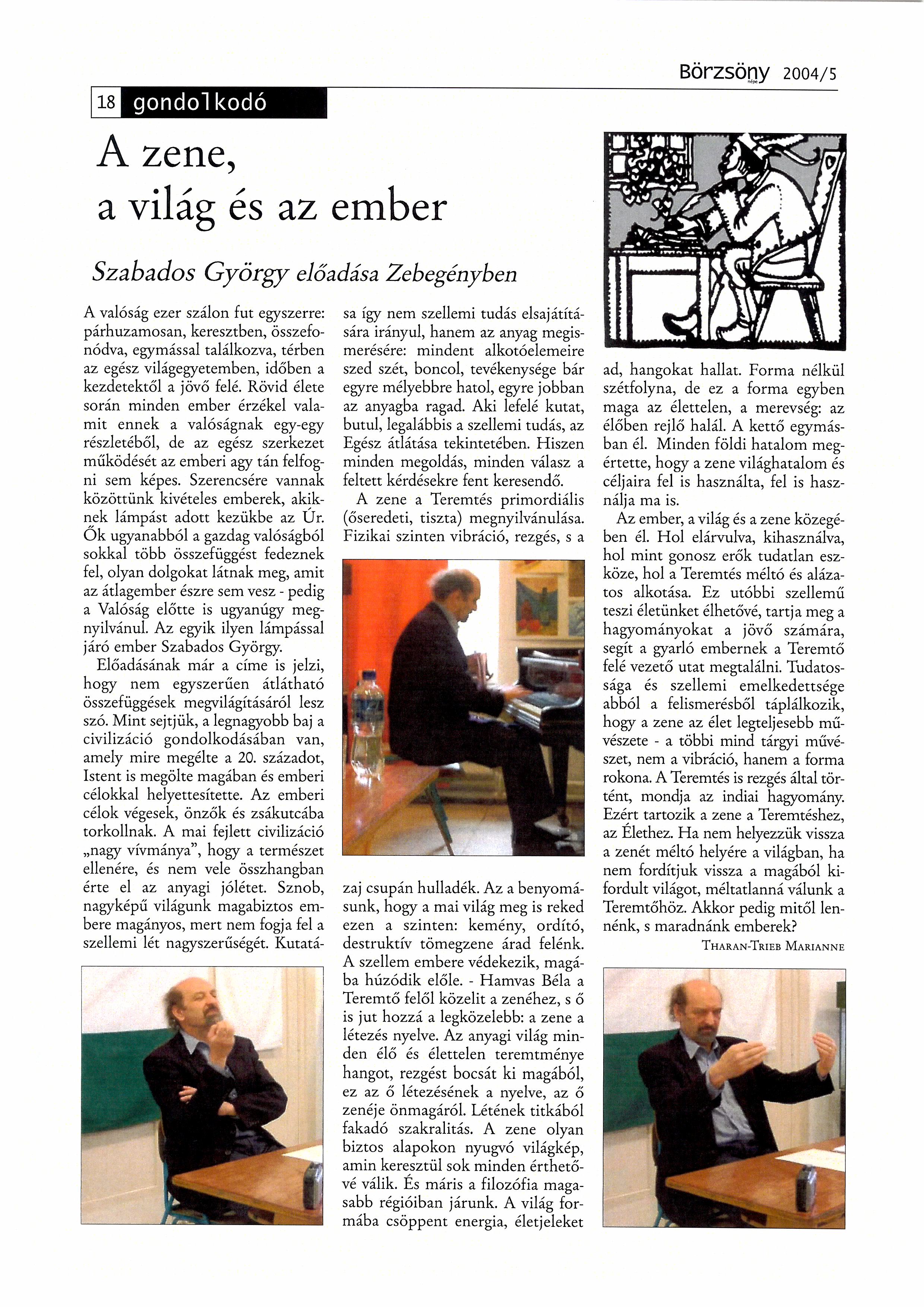