Ervin Malina, double-bass graduated from the Art Academy of Novi Sad (Serbia) in 2007.
His ability to transform and identify with different music styles made him a valued member of a variety of ensembles on his musical journey. Great inventiveness and imagination align him with the most sought-after double bassists in Novi Sad, especially for performing improvised music, jazz.
He is a regular member of the Vojvodina Symphonists Orchestra, as well as of the former Novi Sad Chamber Orchestra. He cooperates also with Olah Vince and his Earth-Wheel-Sky Band, which recorded the music for several Serbian national TV serials. As a member of the Serboplov ensemble of clarinet player Bogdan Rankovic, he has performed in many concerts and festivals in Serbia, Germany, Hungary… his cooperation with composer Boris Kovac brought him to Norway, Poland, Czech, Bulgaria, Japan…
He also cooperates with the composer Mezei Szilard, in the Mezei Szilard Trio, and other ensemble formations, with whom he has recorded a number of CD albums as well as music for theatre performances.
He has participated in the theatre performances of Josef Nadj: ‘ASOBU’, ‘Length of 100 Needles’ for which the music was composed by Mezei Szilard. He occasionally cooperates with Hungarian composer Szabados Gyorgy and his MAKUZ ensemble.
As a member of the OSSA Jazz Quartet, he has a CD album and a great number of performances in festivals and clubs. He cooperates with different folklore ensembles (tours in Czech, Slovak, Romania, Hungarian, etc.). He is also guest on a new project of the composer Milan Nenin and Novi Sad band ‘Tripcycle’. 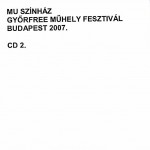