Sue Foy is from northern California where she began dancing at the age of 7, later she performed in amateur international folkdance groups there. She first came in contact with Klezmer music in the late 1970’s. All of these experiences led her to the graduate program in Dance Ethnology at UCLA. In the late 1980’s, she lived in New York City and participated in research on Yiddish dance in Jewish communites. For the last 20 years Sue has been living in Hungary, doing translation work on film and traditional dance and music of the region. She has participated in dance research all over the region and teaches workshops on dances of Eastern Europe including Yiddish, Hungarian, Transylvanian, Transcarpathian and Moldavian dance. 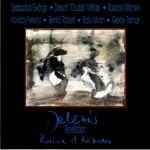 other Translations of LINER NOTES: