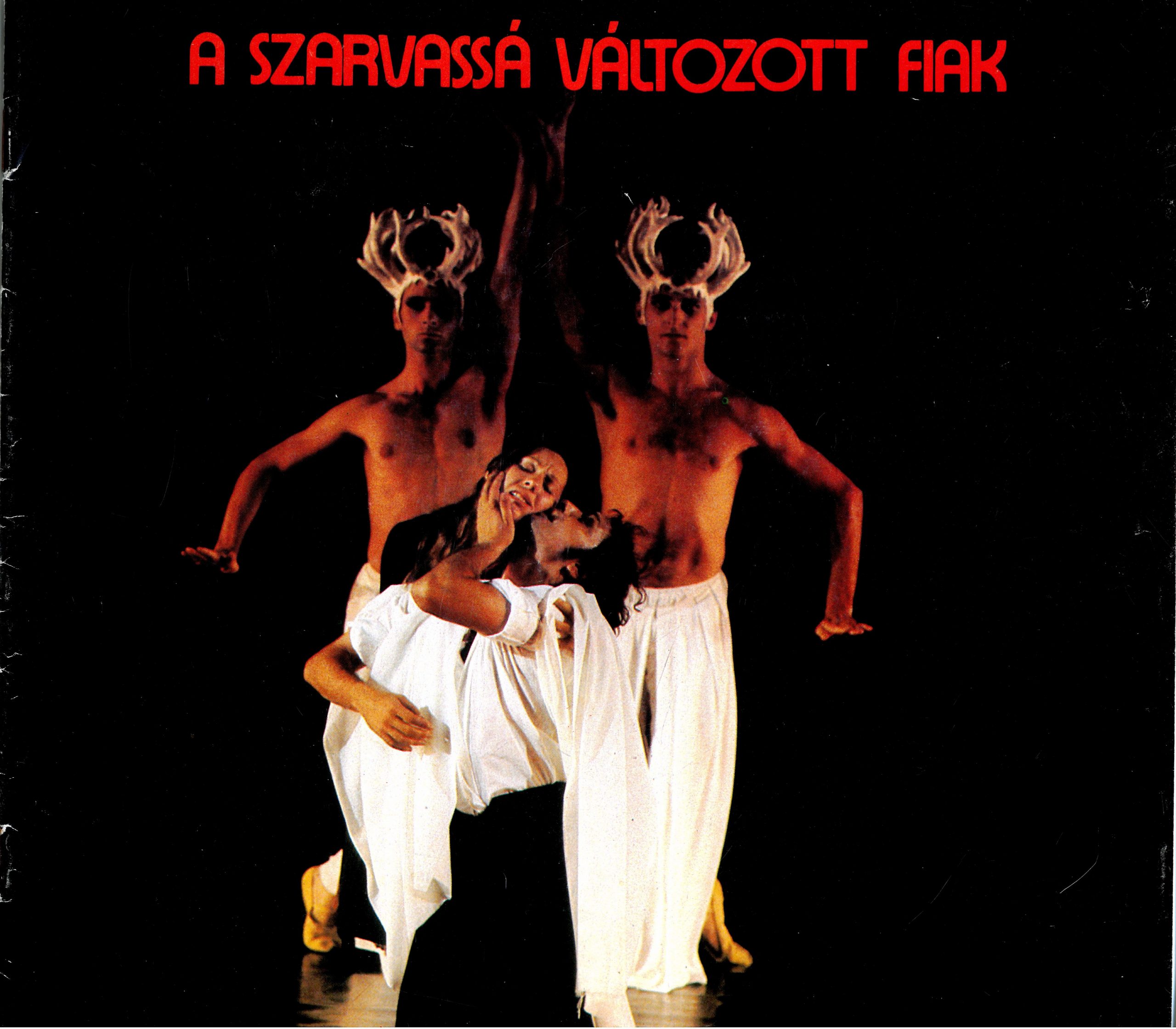 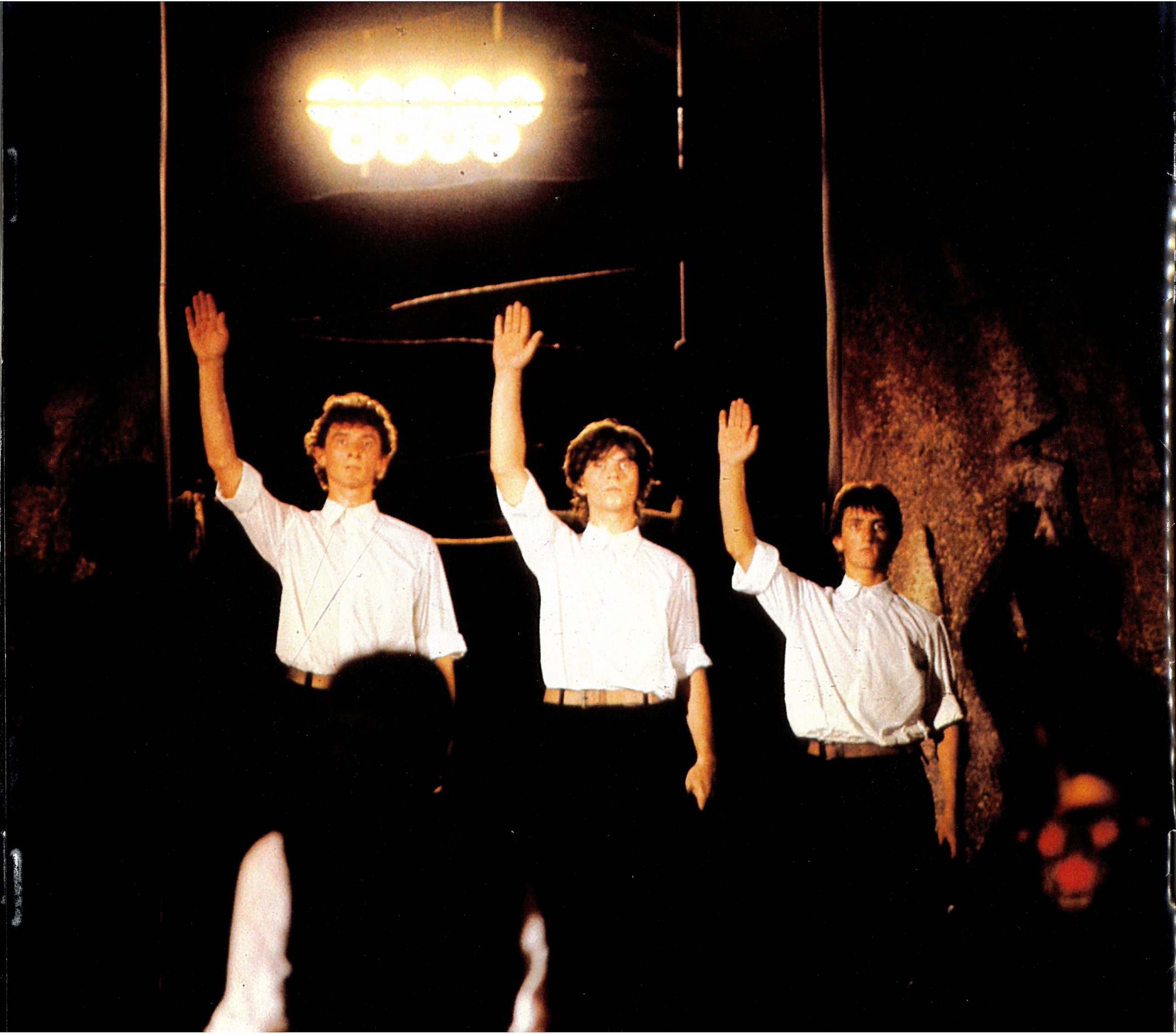 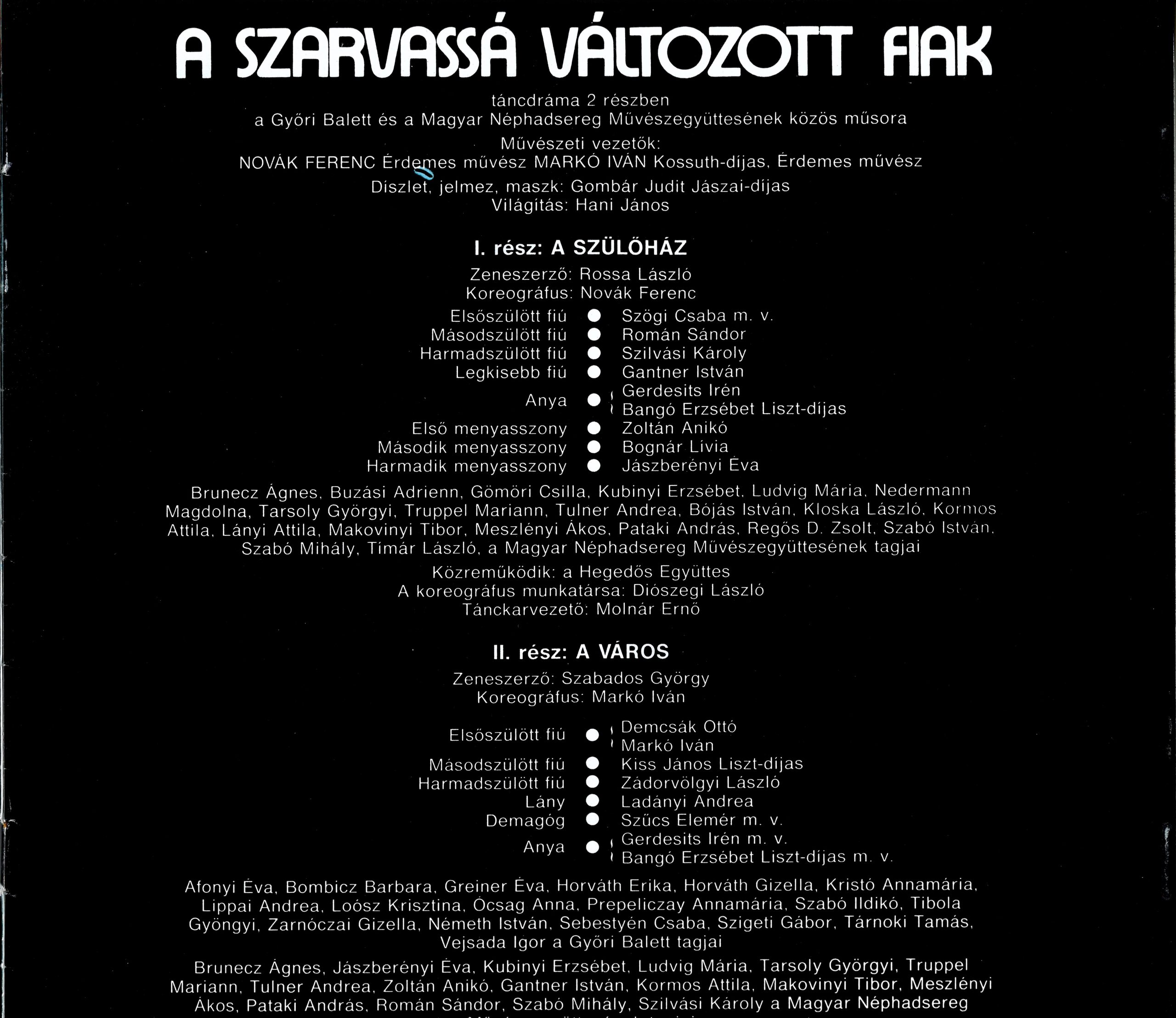 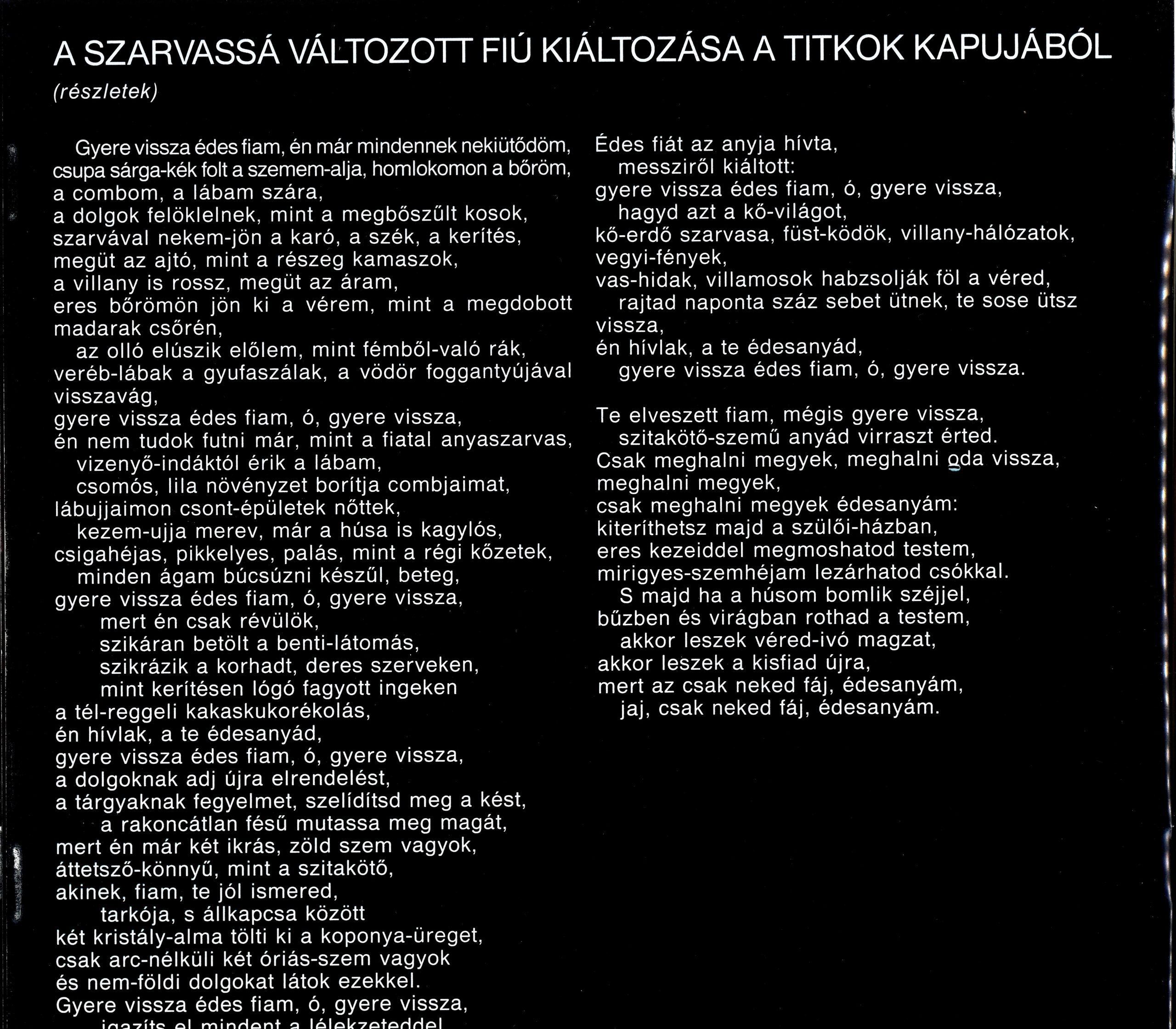 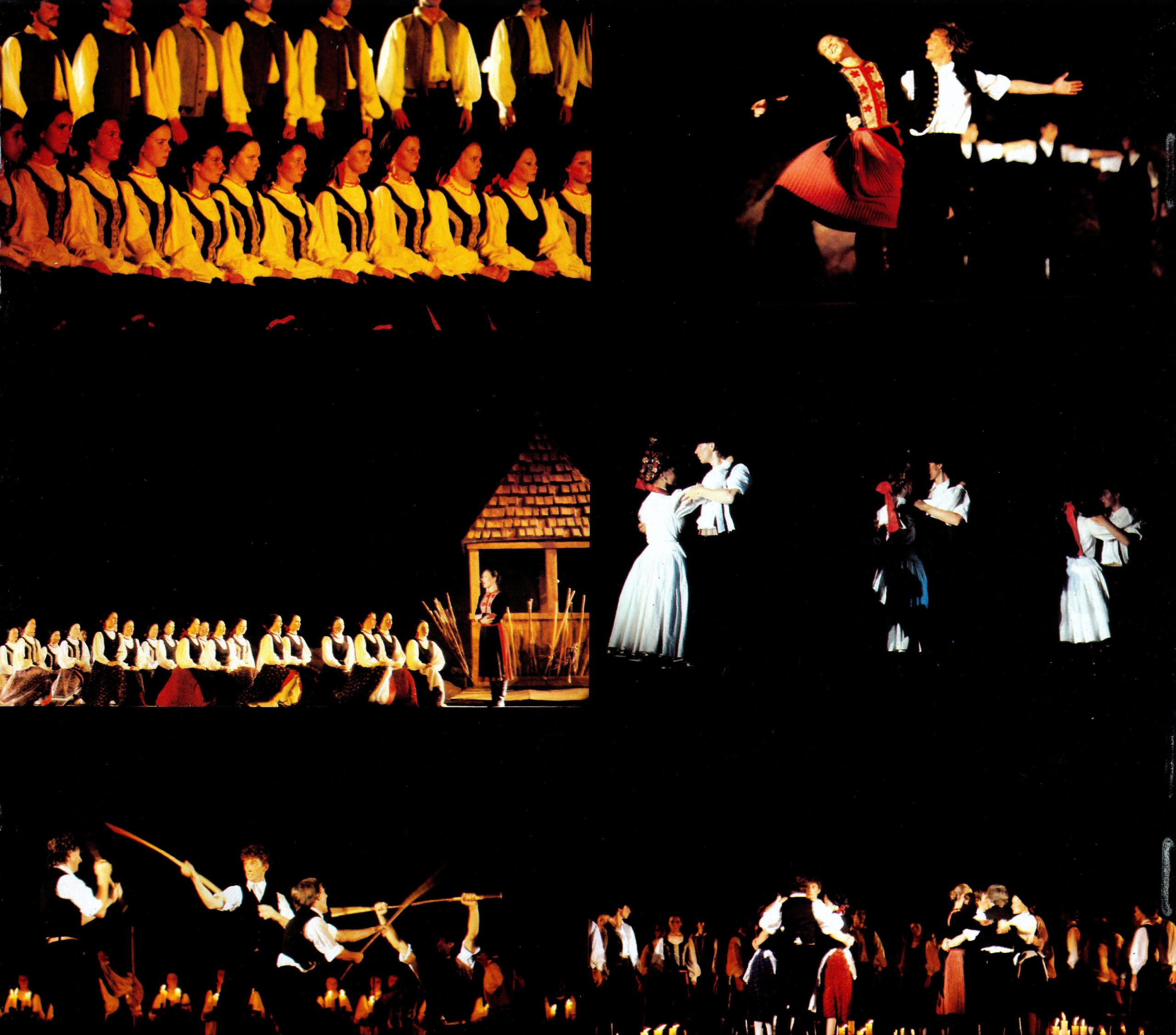 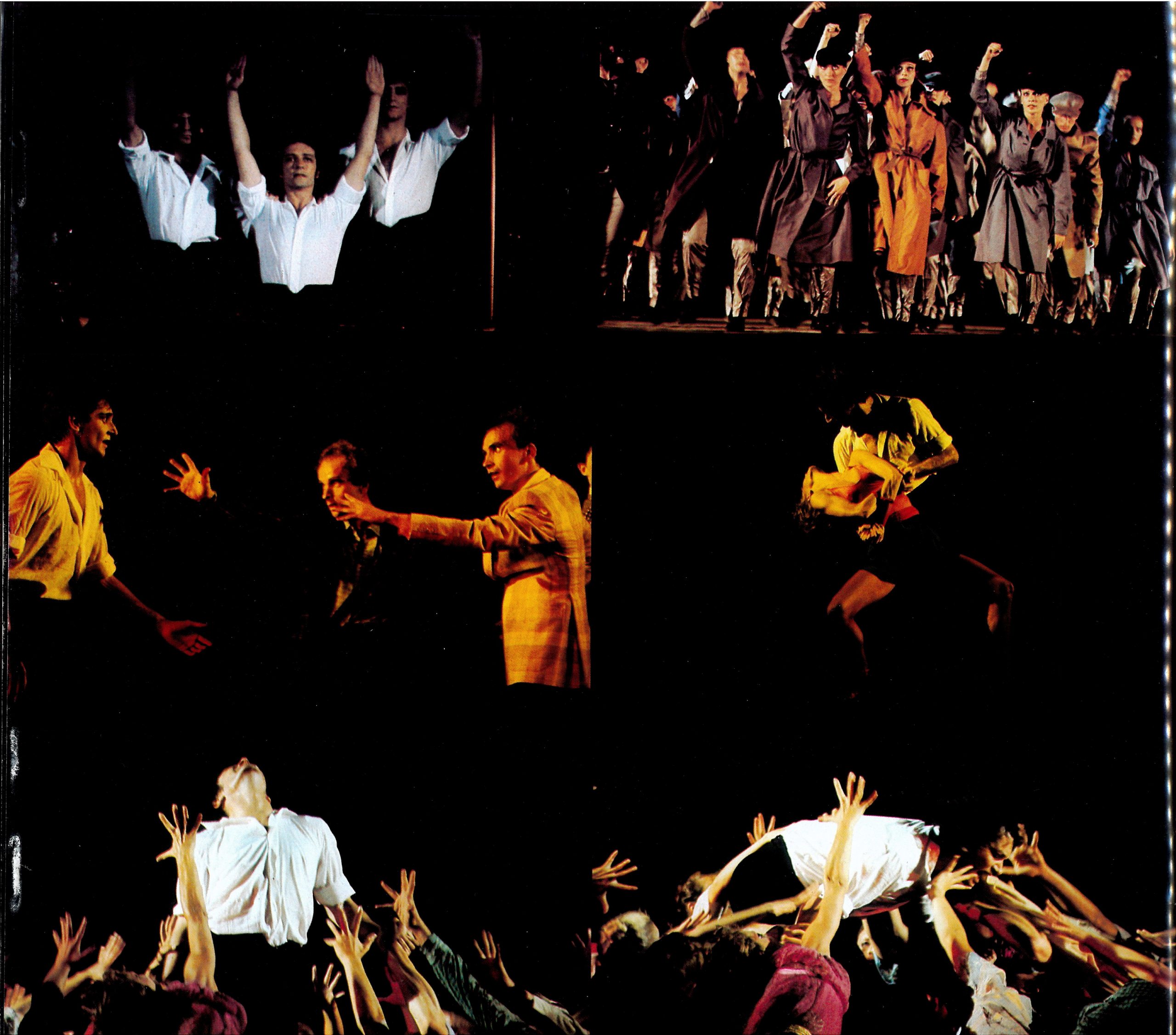 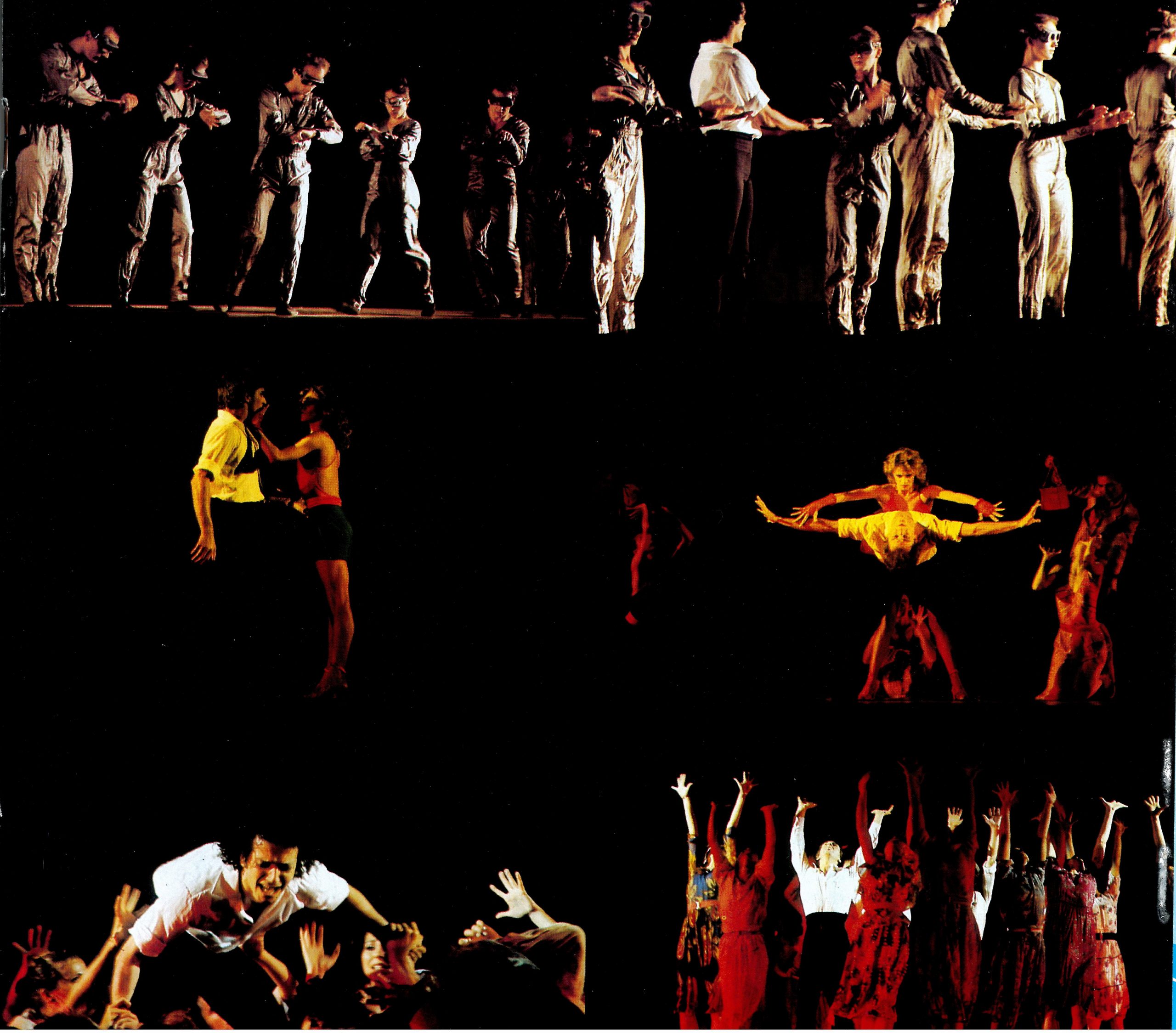 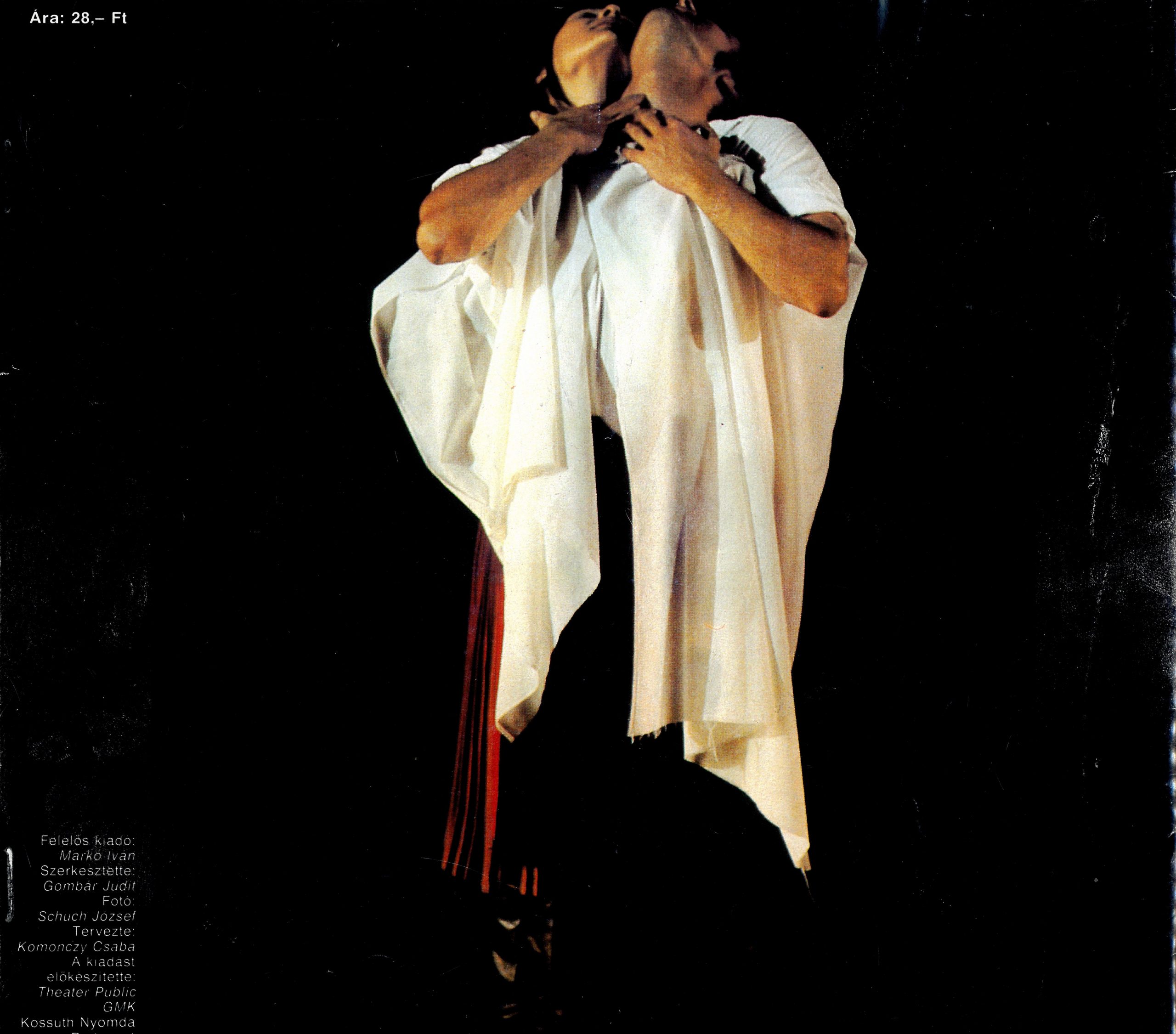 The music of The Sons Turned Into Stags was commissioned by ballet director Iván Markó, choreographer, in the fall of 1984, for his troupe Györi Balett (Ballet of Györ). The single act music piece was completed by the end of January 1985 and was recorded in studio 22 of the Hungarian Broadcasting Company in March, with Johannes Bauer, Mihály Dresch Dudas, Antal Lakatos and György Szabados as soloists and the extended MAKUZ Orchestra conducted by the composer.

The basis of the composition, which requires great improvisational practice, is the legend of a Transylvanien KOLINDA (Christmas mountain folk song) of the same title well-known in Eastern Europe in several local variations. Béla Bartók was the first to draw from the story of the sons who lived and died for renewal and purification in his nature hymn. Poet Ferenc Juhasz made it into a poem threateningly full of doubts in witch modern age with its progress, industrial civilization and its ideology, the unwary mind’s paradise on earth became the torturing scene of human revival, from which this piece of music started on its way.

Here the story is irrevocably dramatic, both individually and communally. The sons having stepped out once in the surrounding world with pure heart are now facing challenged by the demons of helplessness and desperations. Withered peace and suicidal “holy” war, deadly modernness and lost past, self-preserving hatred, coward violence and panicky cult of pleasure are opposed in them: parts that won over the Whole. It is the symbiosis of stupid sorcerer’s apprentices and jealous satanlets, all greedy and incapable. Outside, a declining, wild bereft of the spint world, in which the great answer of the irrationality of Nature is prepared behind the fake lavishness of the scenes, inconspicuously and mysteriously….

But deep in this painful myth the life and death of cultures is also at stake in the triple fate of the sons. Choises and ways. Deadly devouring of selfish and unlimited licence (eldest son), the illusion of power and the successive apocalypse (second son), and the fate of the youngest son, who heeds to his heart’s calling but after his borther’s fall he is longing for his mother’s goodness desperately and in vain – there is no way lack for him either. Problems are always the same, timeless and unavoidable.

Man has to save himself first. Suffering again the miracle of existence, submerging in its deep inner lakes, he will have to take the Whole World in his heart and artistic soul. He will have to find himself to unite with the Whole, to form a union with the Gods.

The musical texture of the piece is extremely loose and open, the rhythm is relative, yet the style is strict and the aspiration is to be unambiguously understood. The performance requires the creative cooperation of musicians of the new school.

The ballet has first staged on August 18, 1985 at the Szeged Open Air Festival. The music was performed at a concert of the Budapest Spring Festival, In Petöfi Hall, on March 21, 1988.

for the composition: A szarvassá vált fiak (The Sons Turned into Stags):

Ballet präsentation Mechanikus kert (Mechanic garden), at the National Theatre of Györ in Hungary to Szabados composition Tánczene from the Adyton LP.

Ballet premiere präsentation A szarvassá vált fiak (The Sons Turned into Stags), Choreography at Dóm tér, the Szeged Open Air Festival in Szeged (HU) – there where 2 performances per day

Ballet präsentation Mechanikus kert (Mechanic garden) in the Csokonai-Theater in Debrecen (HU) with music of the Szabados composition Tánczene from the Adyton LP.

Ballet präsentation Mechanikus kert (Mechanic garden) in Baltimore (US) with music of the Szabados composition Tánczene from the Adyton LP.

Stage performance where the actors have no texts (fine art theatre) with the title: “sziklarajz.hu (Rock drawings)”, at Zsámbéki színházi bázis, Etyeki u. 2, Zsámbék (HU)